Last month we ran a series of Spotlights on different FMPers as an example of employee recognition. Our devoted readers enjoyed these blogs so much that we’ve decided to continue the series, showcasing the great people that make FMP a fantastic place to work and who bring so much to their clients and team members. This spotlight is on Budd Darling, one of our consultants working within FMP’s Technology and Tools Center of Excellence. And, randomly enough, this Spotlight is being published on his birthday- Happy Birthday, Budd!

How did you find your way to FMP?

Before coming to FMP, I was working at another company doing training and development-related work. I really wanted to do more work with data, but in that position, I didn’t have that much opportunity to do it. After I was laid off and began looking for new work, I knew a former FMPer and then realized I had other FMP employee connections. Those connections had great things to say and, most importantly, there was a position that was really focused on data and technology. So, hearing more about the work and knowing the people, I was excited to apply and was excited to make the move.

This move required you to relocate from Florida to Arlington, VA, which is a pretty big jump. What have you liked the most and the least about this transition?

The worst part was definitely the physical process of getting here- I hated the moving part. I had to drive a truck from Florida to Arlington, which took two days and, since I have a dog, I had to find dog-friendly hotels along the route. We did it over the course of 2 days, but I picked the worst week to start- the Monday after Easter. Driving through Easter weekend traffic was pretty challenging.

On the flip side, this is a really different climate from Florida, which is obviously hot and humid all of the time. I’d never lived anywhere with snow prior to moving here and it’s been neat to see the change of seasons. It still gets really hot here and there’s not as much snow as I expected, but it’s been nice to live in a place with different weather. I chose Shirlington in particular because of the dog park and I’ve appreciated having that nearby, which was a big influence for where I settled. Shirlington also has everything you need, which is both a good and bad thing. It’s nice that you don’t really have to leave here for to have all of the necessities, but it’s nice to be able to get out and remember to go into DC every once in a while.

You have a reputation for being good with numbers, web stuff, and designing tools- what are the things that you most enjoy working on?

I like working with data a lot and most enjoy taking data and building something out of it. That’s the enjoyable part for me- building something new. I’ve always enjoyed that growing up, although maybe not with data at the time, but it’s similar to what we do. We take the data and make something interactive out of it that someone can use, like a dashboard. Numbers also just seem to make more sense to me- there’s a logic to them and it’s less subjective. Data is impartial- you aren’t trying to make the data say something- it just describes it, but it doesn’t have a lens on it. Often times, clients may not exactly know what kind of tool they want to build, but with the data, you know what the possibilities are and you know you can use it to objectively describe the situation. I find this really interesting because it keeps the bias out of a discussion- if you’re analyzing a survey, there’s no good or bad, it’s just what the survey results show you objectively about participant response. I also enjoy the fact that everyone is good at different things (e.g., data analytics, training) and I enjoy the process of taking data and making it make sense to other people or those that don’t spend a lot of time with numbers and data. The entire point of making our dashboards and charts is to make the information digestible so that they can see past the numbers to what is actually happening and the story they tell.

So, what’s next? What do you want to try or learn from here?

Professionally, I’ve been working towards learning more programming, mostly on the side. I’ve gotten to do some programming in the web development world (HTML) which has been interesting and now I’m working on Python programming. Python is a computer language that is very universal, isn’t as specialized, and can do a lot of different things (e.g., computations, plug-ins that can create graphs, charts, dashboards). What I’m most interested in learning is how to automate things in Python to create efficiencies. For example, we had a client project where we needed to see how many potential webpages that we’d need to reprogram. Instead of manually counting the webpages, I wrote a Python script that searched the file provided by the client to look for the different key words and exported that into Excel. I was able to pull information on what the page was called and where it was located, so it gave us a better estimation of how much work we had ahead of us. It was able to calculate it in a matter of seconds and, although it takes time to write the code, that code is able to be tweaked and reused for other things. That’s a big future for a lot of companies- how to utilize technologies to create efficiencies. You aren’t trying to get rid of people’s jobs, but take the time out of the mundane tasks that (when scaled) take up a lot of time. If you can reduce the time that takes someone, it gives them the free time to do more intentional work and be less burdened by the manual, repetitive tasks. 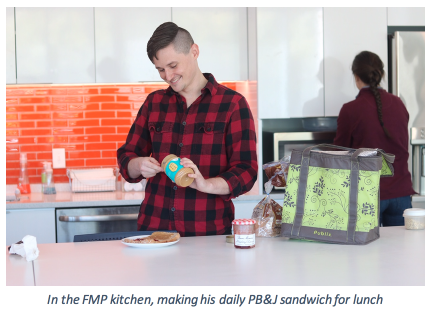 On a personal level, I’ve started working out more, eating better, and trying to live a healthier lifestyle. I’ve been doing this for about 4-5 months and I’m using a data-based approached that’s giving me results. It’s challenging and I’m sore, but not to the stage where I can’t move afterwards. I’m also not getting burned out or dreading going to the gym. This program is structured in a month-long cycle, with 3 weeks of weight lifting, with each month ending with you increasing your personal record (PR) on the major lifts and then it builds over time. The fourth week is your rest week and you still work out, but it’s lighter and emphasizes rest and repair. Then you start the next cycle, but you use your new PR to base the calculations for that cycle. It’s a good slow build-up and, unlike other programs, it doesn’t exhaust or burn you out.